Americans have had different eating patterns over the past 45 years.  The chart above shows the pounds of each food item consumed per year by the average American.  The beef consumption has decreased dramatically from a peak of 68 lbs per year in 1976.  In 2014, the average American only consumed about 39 lbs per year, a reduction of 43%.  This change is likely due to the negative stigma that "red meat" has in the US today.  Americans have been more conscious about their eating habits, and turning away from beef is a part of that.  To compensate for this, many Americans turned to chicken as a source of protein.  Chicken took over a large portion of that meat consumption dropped by beef.  For the most part, the amount of the other foods on the chart stayed consistent over the 45 year span.  However, almonds in particular have seen a spike since about 2005.

McDonaldization is all around us.  Nearly every business now uses processes of McDonaldization to increase their efficiency.  McDonaldization is a broad term used to describe fast food principles now dominating other sectors of society (Ritzer, The McDonaldization of Society: 20th Anniversary Edition, page 1).  McDonaldization encompasses efficiency, calculability, predictability, and control (Ritzer, 13).  The main concept is choosing maximum production rates and minimum cost to provide goods for consumers.  McDonaldization stresses quantity, as opposed to quality.  For this assignment, I had to go out in the world and find a way to mess with the principle of McDonaldization.
To accomplish this, I called ESPN to complain about the fact that TV timeouts are called in football and basketball games.  This is an example of how ESPN has been impacted by the “calculability” aspect of McDonaldization.  ESPN, and all other television companies, use commercials and advertisements as an additional source of revenue.  However, it has reached a point now where these TV timeouts interrupt the flow of the game (Ritzer, 80).  TV timeouts are specifically designated, even when there is no natural break in play due to a timeout or halftime.  The gentleman I talked to at ESPN Customer Service was woefully unprepared for my questions.  He took about five seconds after I asked a question to respond.  For example, he used phrases like “That’s the way it’s always been” and “Ain’t nothing we can do about that.”  I felt bad for the man who had to answer my prodding questions.  At one point, he even started asking me questions, as if trying to figure out exactly what I meant.  My questions were so unusual for him that he didn’t know how to respond.
This was a very difficult assignment for me.  I am typically non-confrontational and easy-going, so this assignment made me feel very uncomfortable.  I had to be rather rude to this gentleman to complete the assignment.  Even though it was just a phone conversation, that four minute conversation made me sweat.  I knew that my demands would not be met, but I think I definitely made that man at ESPN think twice about McDonaldization and it’s prevalence in today’s society.
This exercise was not meant to condemn the fast food industry and give the appearance that McDonaldization is a disaster.  In general, people welcome the changes McDonaldization brought to society.  The four pillars of McDonaldization all make logical sense.  Every consumer wants products that are the same every time.  Consumers want a product that gets to them in a quick, efficient manner.  Businesses and employers want to maximize their profit.  However, these changes brought about some unintended consequences.  The quality of goods started to decrease once the companies started using principles of McDonaldization.  Even though McDonaldization has its flaws, don’t expect it to go away anytime soon. 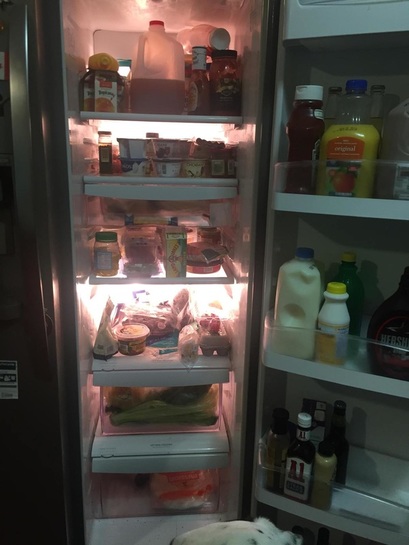 ​For this assignment, I contacted my friend’s parents, who graciously sent me a picture of the contents of their refrigerator.  Due to time constraints, I wasn’t able to make it to the house for this project.  Nonetheless, the photograph gives me great insight into what their family eats on a regular basis.  At first glance, I noticed how average this refrigerator looks.  I think it is a very good representation of the average American’s refrigerator.  While the average American might have a fridge that looks like this, there are countries around the world that don’t have any refrigerators or processed food.  In Hungry Planet: What the World Eats, Peter Menzel and Faith D’Aluisio document what the average family around the world consumes in a week.  There are many countries around the world with very different food preferences than this picture, but the American families are documented in a similar manner.

There is a mix of processed foods, as well as fresh foods in the refrigerator.  There are some foods that are healthy and some that are not.  This family has a large vegetable drawer, which appears to be rather full.  That can either tell us the family eats very healthy and just went shopping, or the family doesn’t eat vegetables so they pile up in the refrigerator.  I think it is the former, as there is an unopened half gallon of milk on the door.  I think it’s safe to assume that most people use milk as a gauge for when they have to go shopping again.  While the family appears to drink a lot of juice, which is not the healthiest drink choice, it is healthier than pop or alcohol, which is noticeably missing from this refrigerator.  I also noticed there is not very much meat in the refrigerator.  This could be due to the fact that they have most of their meat frozen, or it could be because they don’t eat very much.  It is hard to tell from one picture what the family’s overall eating patterns are.

A photograph of a family’s fridge can tell you many things about their lifestyle.  This family appears to be a middle class family with ample time each night to a meal.  In Joan Gross and Nancy Rosenberger’s book, The Double Binds of Getting Food among the Poor in Rural Oregon, the authors discuss the struggles faced by poorer citizens.  I don’t believe this family struggles with the same issues as families in Oregon who do one big shopping trip a month and then just manage to get by the rest of the time.  While I don’t think they spend a large amount of their money on food, I do believe they spend enough to get the right blend of foods they enjoy to eat and foods that they know they should be eating to stay healthy.

Day 1
Breakfast: Onion Bagel, 2% milk
Lunch: Apple, "Sweet and Salty" Almond granola bar, bag of Famous Amos chocolate chip cookies
Snack: Apple, pretzels with peanut butter, 2% milk
Dinner: 2X fried hamburgers with Ranch seasoning, cheddar cheese, onions; salt and pepper chips, 2% milk
​Day 2
Breakfast: Banana, 2X scrambled eggs with shredded cheddar cheese, orange juice
Lunch: 10X traditional chicken wings from Buffalo Wild Wings (lemon pepper seasoning)
Dinner: Chicken breast marinaded in Teriyaki sauce, rice with soy sauce
Analysis
The goal of this assignment was to track the many food items I put into my body in a two day span.  On the first day, I was supposed to eat foods comparable to what I normally eat. On the second day, the idea was that I would try to avoid processed foods as much as possible.  It turns out that, in my case, the small sample size was not very representative of how I feel about my eating habits.  I consider myself to be a healthy eater, but these two days don’t showcase that healthy lifestyle.  Both days were very different from what I consider an everyday diet.  Day 2 was particularly strange, especially since I was supposed to try to eat less processed foods.  As a young active man, I typically eat a lot of food, but I try my best to eat the healthiest foods possible.

After a weekend away from responsibilities at a tournament for my club Ultimate Frisbee team, I returned home Sunday night to a very busy week.  I had a bunch of homework that I had to finish, as well as a big quiz in one of my classes on Monday.  This led to a very hectic Monday morning, as I was devoting more time to preparing for my courses than caring for myself and my food intake.  For breakfast, I ate a plain onion bagel, whereas I usually eat my bagels with cream cheese.  I also usually pack a lunch on Mondays because I don’t have time to return to my apartment between classes.  However, since I was busy, I completely forgot to pack a lunch.  I happened to have a couple of snack items in my backpack, for a situation like this.  Unfortunately, I’m sure the granola bar and bag of cookies had a very large number of food additives.  After reading Pandora’s Lunchbox: How Processed Food Took Over the American Meal by Melanie Warner, I understood just how big this problem was.  Many of the food additives in everyday food items are very dangerous chemicals (page 97-123).  These chemicals are often in trace amounts in our processed food, but that begs the question of why they’re in our foods in the first place. When I got back to my apartment after class around 5, I was starving.  As a result, I ate a large snack.  I usually just eat a piece of fruit, but on Monday, I also added a bowl of pretzels and a spoonful of peanut butter.  For dinner, I ate two hamburgers.  These were seasoned with a packet of Ranch prior to cooking.  After frying the burgers, I put cheddar cheese and onions on top.
​
Day 2 was also an atypical day, especially for someone who is trying to avoid processed foods.  For breakfast, I ate two scrambled eggs, an option which I think is healthier than most breakfast foods.  My parents just returned from a big trip overseas and they were driving through East Lansing on the way back home.  My mom’s favorite restaurant is Buffalo Wild Wings, so we met there for lunch.  I ordered 10 traditional chicken wings.  I usually order boneless wings, but I figured the traditional ones were probably less processed.  In Pandora's Lunchbox, Warner discussed the many negatives of the flavoring industry.  One point she made was the difference between a cheap, average chicken from the supermarket, a mass-produced frozen processed chicken, and a “happy” chicken, which spent its life outside (page 173).  She concluded that the “happy chicken” had the best flavor.  I don’t know what kind of chickens Buffalo Wild Wings uses, but I would guess it is from the mass produced variety, which means it has added flavor.  That means it is heavily processed and not very fresh.  I always have dry rub seasonings on my wings, which are probably less processed than the sauces.  After classes and Ultimate Frisbee practice, I returned to my apartment.  I have a roommate who likes to cook, so he made dinner on Tuesday night.  He made chicken breasts with a Teriyaki marinade.
​