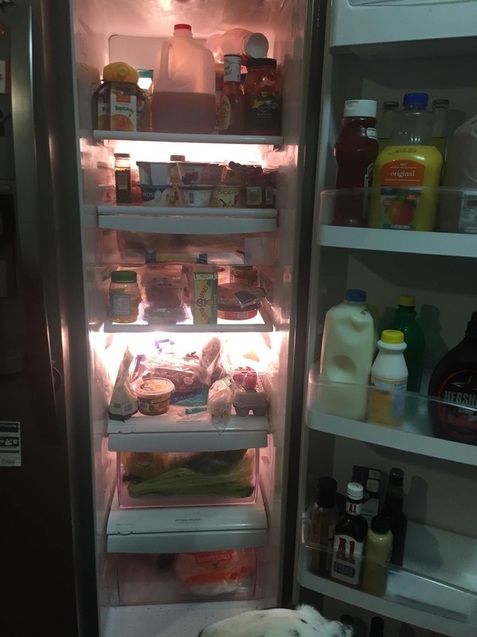 ​For this assignment, I contacted my friend’s parents, who graciously sent me a picture of the contents of their refrigerator.  Due to time constraints, I wasn’t able to make it to the house for this project.  Nonetheless, the photograph gives me great insight into what their family eats on a regular basis.  At first glance, I noticed how average this refrigerator looks.  I think it is a very good representation of the average American’s refrigerator.  While the average American might have a fridge that looks like this, there are countries around the world that don’t have any refrigerators or processed food.  In Hungry Planet: What the World Eats, Peter Menzel and Faith D’Aluisio document what the average family around the world consumes in a week.  There are many countries around the world with very different food preferences than this picture, but the American families are documented in a similar manner.

There is a mix of processed foods, as well as fresh foods in the refrigerator.  There are some foods that are healthy and some that are not.  This family has a large vegetable drawer, which appears to be rather full.  That can either tell us the family eats very healthy and just went shopping, or the family doesn’t eat vegetables so they pile up in the refrigerator.  I think it is the former, as there is an unopened half gallon of milk on the door.  I think it’s safe to assume that most people use milk as a gauge for when they have to go shopping again.  While the family appears to drink a lot of juice, which is not the healthiest drink choice, it is healthier than pop or alcohol, which is noticeably missing from this refrigerator.  I also noticed there is not very much meat in the refrigerator.  This could be due to the fact that they have most of their meat frozen, or it could be because they don’t eat very much.  It is hard to tell from one picture what the family’s overall eating patterns are.

A photograph of a family’s fridge can tell you many things about their lifestyle.  This family appears to be a middle class family with ample time each night to a meal.  In Joan Gross and Nancy Rosenberger’s book, The Double Binds of Getting Food among the Poor in Rural Oregon, the authors discuss the struggles faced by poorer citizens.  I don’t believe this family struggles with the same issues as families in Oregon who do one big shopping trip a month and then just manage to get by the rest of the time.  While I don’t think they spend a large amount of their money on food, I do believe they spend enough to get the right blend of foods they enjoy to eat and foods that they know they should be eating to stay healthy.